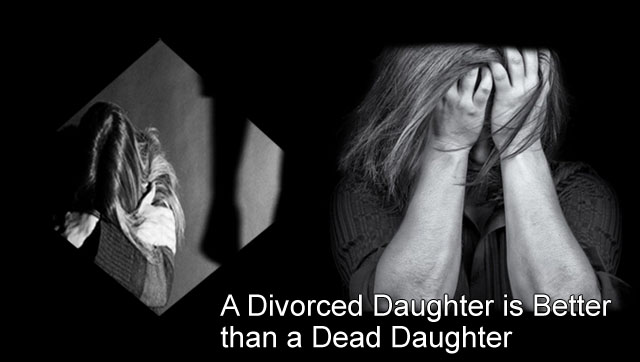 In India, women are doing their best in every field. They are achieving whatever they keep their eyes upon. Women empowerment is booming like forest’ fire in this 21st century. But our nation has a long way to go when it comes to accepting women, breaking stereotypes and creating their own path with or without men. Nowadays a woman has its own identity instead of getting recognized by the name of her husband. Earlier, women were taught to serve their husband, in-laws and raise their kids. But the time has been changed and women are no longer confined to four walls of a house. However, women were always taken for granted due to their selflessness. Many times, women tolerate physical and emotional abuse in their married life and the situation becomes even more ironic when their parents force them to continue their abusive marriage due to the fear of society.

The major reasons why women afraid of taking divorce are as follow:

But all these circumstances are temporary and nothing lasts long if the situation is handled carefully. It is said that “where there is a will, there is a way” and this is what every woman should understand.

In the matter of the fact, the trend has slowly changed and women of our nation understanding their worth and exploring the outer world with glory. The most important factor which has boosted confidence among women is Education. Now, women are no longer ready to entertain any sort of suppression in or out their marriage. Nowadays, married women gracefully manage their lives by keeping their rights and duties on the same pedestal. They are no longer ready to bear any indifference and always upfront to speak their mind.

If we talk about divorce, it is never a treat of joy for anyone, but a very critical decision to take. No one willingly dissolves their marital relationship, but sometimes divorce is the only way left. We often neglect the thoughts of divorce especially when the thought comes from the side of women. Usually, women ask for a divorce in the following conditions:

Women are being educated and exploring the different arena of professions so that they can gain financial independence and live a life of their choices. But society still judges them for making choices, and choosing divorce is the most criticized decision as per the norms. Even though if they are struggling in their married life, people ask them to compromise. Some ladies out there listen to their family and in order to preserve their respect in society, avoid divorce and continue the abusive or a lifeless relationship. The peer or social pressure often leads to a hazardous result and we see the unhappily married women ending their lives.

Apart from this, we often hear cases where in-laws killing their daughter-in-law for dowry or some other reason. But every crime knocks, which must be heard. If you come across a woman who is not happy in her marriage or share the depths of her abusive marriage, support her to end the marriage instead of pseudo-consoling. The compromise can cost a life, thus if the situation becomes severe and there is no scope of improvement in a marriage, ending it the best decision one can make.

Someone said a very epic phrase that “A divorced daughter is better than a dead daughter”. This line can give goosebumps to many. This eye-opening sentence clearly states that taking a divorce is much more considerable than ending a life. If you are not able to pursue the marriage, the divorce is the apt step to take. Also, parents must understand the dilemma of their daughters and support them to start a new life.

However, it is advised to take legal advice while considering the divorce. A professional lawyer can give you the best advice which can make the divorce process much easier and help you make a fair settlement. Delhi divorce lawyers firm is giving constant support to women who aren’t happy in their marriage and need experts’ as well as unbiased advice.